On October 24-27th 2019, I went on a retreat organized by The Psychedelic Society in the Netherlands. Since a lot of people have demonstrated interest and/or curiosity about it, I wrote this document to record my thoughts and impressions. If there’s anything else you’d like to know that’s not mentioned here, please feel free to ask me directly!

A lot of the logistics are covered in this document they shared with us prior to the retreat. Overall I was very impressed with the quality of the organization, every minor detail has been thoughtfully planned and I had an amazing time. The facilitators were absolutely fantastic, very knowledgeable, kind and helpful people. I’m deeply grateful for the work they did and how helpful they were during the entire retreat.

We met in a Smart Shop in Amsterdam where we bought the truffles then walked to the Central Station where we all took a shared bus to the venue, which was ~2 hours north of Amsterdam. The venue was a beautiful, peaceful and huge house in the middle of nowhere in the Netherlands, just nature all around. It seemed like a small city in a quiet rural area. 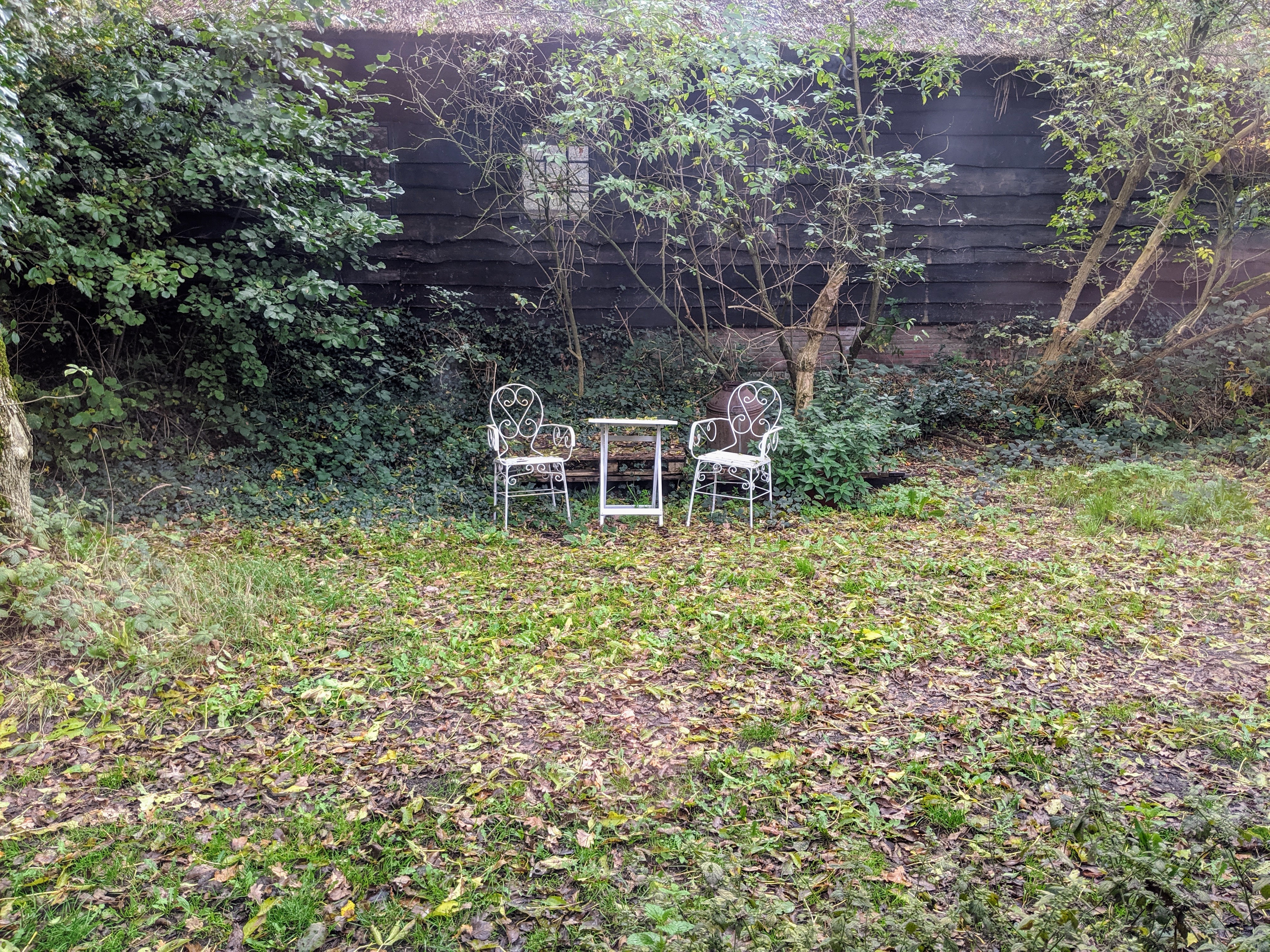 This was the view from my bedroom

The group was composed of ~ 20 people, including 4 facilitators. We were divided in rooms of 3-4 people each (a couple of people paid extra to stay in a private room). It was a pretty diverse group with people from all walks of life and ages. The vast majority was european (lots of Brits, scottish, german, irish) and just ~3 from the US (including myself). I was probably on the younger end of the age range, the oldest ones were probably in their sixties/seventies (~3 people). Gender wise, it was evenly distributed. Everyone was super friendly and open minded (as expected). There was a lot of positivity and good vibes all around. It was easy to approach people and chat about anything.

On the first day, we arrived around 6pm and had some group activities until ~10pm. The activities were mostly around getting us into a relaxed state of mind (eg.: meditation), stating people’s intentions for the retreat and getting to know each other (icebreakers, etc.). On the second day, during the morning we did more group activities with meditation, preparation for the mushroom trip (what to expect, etc.) in the afternoon and had 1:1s with the facilitators. The main goal seemed to be having everyone in the right set & setting for the trip. We were served food in the morning, all meals were 100% vegan, fresh, delicious and cooked right there by one of the facilitators. 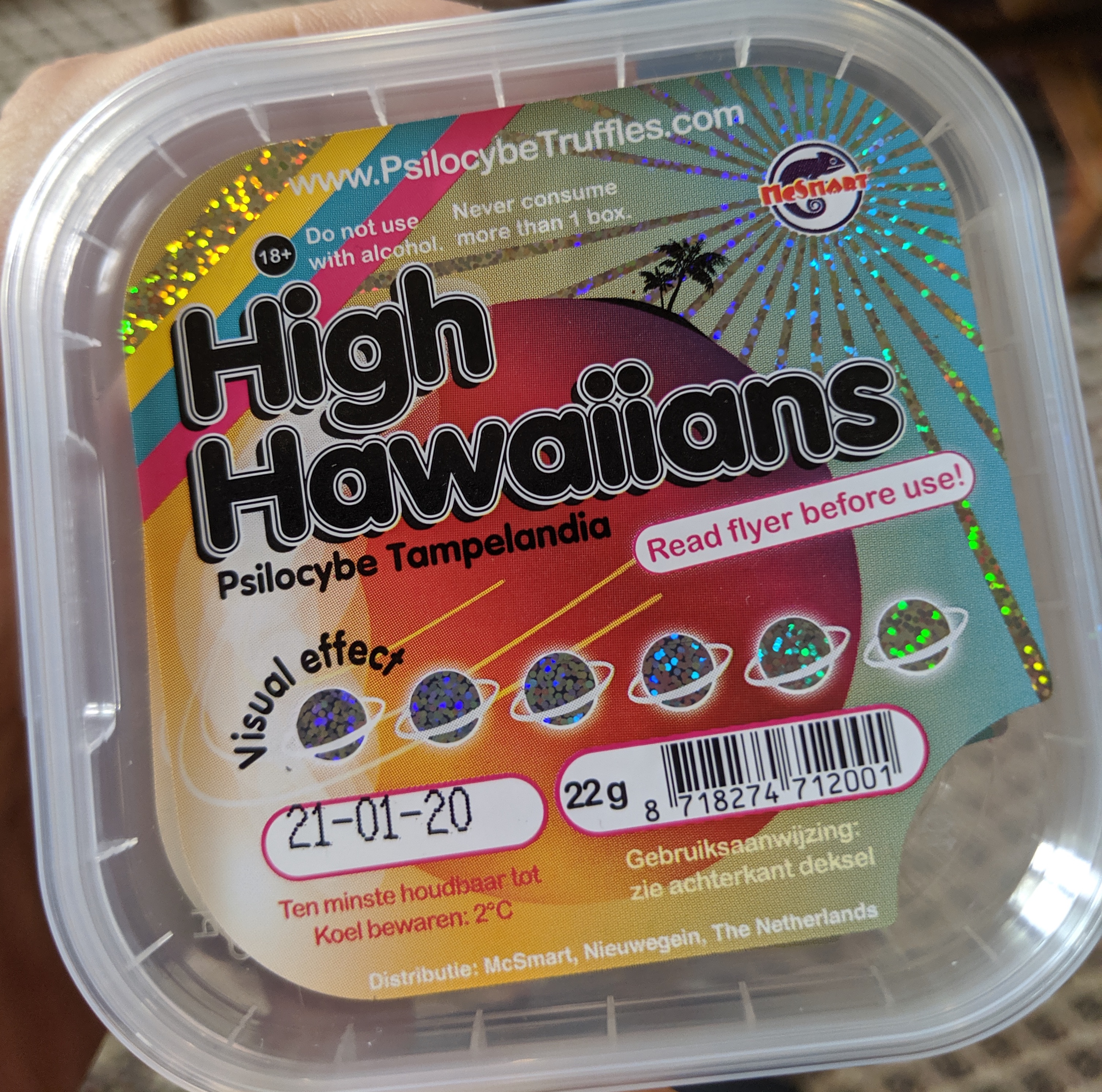 We had a pretty high dose of mushrooms (as explained in the PDF linked above) which was delivered in two parts, the second dose was completely optional, but I think most people had it. We had two packs of mushrooms each, which I think is double the “recommended” amount when buying at the shop. The tea itself wasn’t too bad, it had the aspect of a chai and was totally drinkable. I didn’t feel any nausea at all and I think most people didn’t either (it happens more often when eating the mushrooms directly instead).

My trip started pretty quickly (15-20 mins after) with lots of visuals that seemed synchronized with the music. They played a specially curated playlist which was absolutely amazing and was a big part of my trip. The visuals were indescribably beautiful, very clear and vivid, something unlike anything I’ve ever seen before. We were all laying down in individual mattresses on the floor of a big wide open room, wearing eye masks with the goal of making the trip more introspective.

After ~60 minutes we had the second dose which is when things started to become intense. I became restless and felt like I was starting to lose control. People seemed to have very different trips, some were very quietly laying down as if they were asleep, others were very agitated, others sitting up as if meditating. It seemed like everyone’s experiences varied widely, more experienced folks (a couple of people were returning for their second retreat) seemed to be having a good time and relaxed, while others (like me) were struggling a bit/a lot more.

At some point I started crying a lot, uncontrollably so, after making some very tough realizations related to early life traumas and issues that were unresolved in my subconscious. Things were extremely clear in my mind during the trip, which made me come to those realizations fairly quickly. Something that would probably take me years of psychotherapy to achieve, I was able to process, understand and cope with in the matter of a couple of hours, which is quite remarkable and honestly mind blowing. The amount of thinking clarity is absolutely incredible and really hard to put into words. A great analogy that I’ve read in Michael Pollan’s book How to Change Your Mind (strongly recommended read if you’re interested in psychedelics btw) is:

“You have to imagine a caveman transported into the middle of Manhattan. He sees buses, cell phones, skyscrapers, airplanes. Then zap him back to his cave. What does he say about the experience? ‘It was big, it was impressive, it was loud.’ He doesn’t have the vocabulary for ‘skyscraper,’ ‘elevator,’ ‘cell phone.’ Maybe he has an intuitive sense there was some sort of significance or order to the scene. But there are words we need that don’t yet exist. We’ve got five crayons when we need fifty thousand different shades.”

It’s really something that you have to experience in order to understand but it’s not an exaggeration to say this was life changing for me. Being able to understand and cope with those issues is something I never expected to happen, but as one of the facilitators told me, “you got exactly what you came here for”. I needed to go through it. I had some other very deep and meaningful insights that I won’t go into detail here, but overall I was able to very easily put my eye mask on and start exploring my mind, navigating back and forth between memories and ideas. Once I got the hang of it, I could easily use my breath to control the direction and my thoughts and focus them where I wanted to go. It was a really powerful and meaningful experience.

After the trip I was completely exhausted and super hungry. I felt like my brain ran a full marathon. We had dinner afterwards and I went straight to bed. The next day I woke up with a headache and still a bit tired, which is fairly common. Taking a painkiller helped.

The day after the trip we had some sessions where everyone had the chance to share something they experienced during the mushroom trip. We went around the circle twice and each person shared something they learned, a realization, something they deemed interesting and wanted to share with the entire group. This was basically a group therapy session. Some people got very emotional and cried. Others were more cheerful and shared how amazing their trips were. Overall, most people had good experiences with a few tougher ones. I think mine was probably on the tougher end, but I remember during it (which lasted about 6 hours) looking around the room and seeing a lot of people crying, struggling and getting help from the facilitators. For me, their help was crucial during the tougher moments, when one of them sit next to me, held my hand and hugged me. If it wasn’t for that, I think it could have been way worse for me and I wouldn’t recommend anyone to do ever do this without the help of someone else to guide them. It can get ugly and you’ll need someone there with you should anything go bad. Also the set & setting is extremely important, I can’t emphasize this enough.

Overall, to reiterate, this was life changing for me. I’m still working on unpacking, digesting and analyzing everything that happened so I can integrate those learnings back into my day to day. If you’re still a bit curious and want to learn more, I’d recommend reading Michael Pollan’s book and/or doing online research. There’s plenty going on lately on this field and it’s getting more traction around the world. This is a powerful tool that lots of people can benefit from!